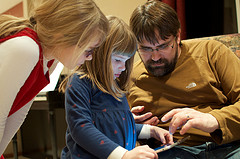 I want to take a moment and discuss in more detail why I've chosen to include "Parental Involvement" as its own category in my ratings. A few months ago, I wrote a short article for Early Childhood Matters where I talk about the "potential" and "hype" surrounding mobile technology in education. Below is an excerpt where I discuss what I believe are three parental misconceptions about using mobile technology with their child. Some parents may already have a hunch about these "misconceptions" (and I think that probably all of the parents reading my blog do since you have taken the time to read reviews about apps), but I wanted to use research to show that these aren't just hunches; to make it evident that parents need to take an active role. So maybe this post is more for the developers reading my blog... how do parents fit into your app?

With young children’s learning so easily affected by formats and features, there is a need for parental and adult guidance. However, there are a few parental misconceptions about young children’s usage of mobile technology that have led to less rather than more parental involvement.

Misconception 1: ‘Technology is not my thing, but my child is great at it, so I just let them use it on their own.’

In an exploratory study looking at intergenerational video game play, by the EA Game Innovation Lab at the University of South Carolina and the Cooney Center, many parents were not comfortable with the gaming system and thus lacked confidence during the game play. They tended to let their child take the lead, and did not offer the same mentoring about the rules and strategy as they did when playing a board game (Chiong, 2009). It is likely that these parents assumed that since their children were adept at navigating the game, they would just figure out any rules or strategies on their own.

But being able to use something does not mean that learning has occurred, especially for struggling students. In a study exploring the effectiveness of a digital literacy program, the findings revealed that there are differences based on learning levels (Chiong et al., under review). The study took place in an underperforming, predominantly minority and low-SES (socio-economic status) school district. When looking at the results by initial literacy levels, the students who started above the mean score on the pre-test benefited from independent use of the digital program. The students who started below the mean score did not benefit from independent use. These results suggest that although the seriously struggling students had no trouble navigating the program, they were not absorbing the content of the materials as much as their counterparts. This supports findings from Neuman and Celano (2006), that although low-SES children were adept at searching for information on the internet, they preferred sites with pictures and barely any print, whereas middle-SES children preferred print-heavy sites. Thus, parents cannot assume that any time their child spends with an educational application is quality time. Children often need an adult to make the materials more meaningful by reinforcing concepts or by linking the materials to relevant issues they are learning in school.

Misconception 2: ‘This program can teach my child better than I can.’

Some parents, especially immigrants and those with lower levels of education, may feel less confident about teaching their own child. They may then rely on programs that have been deemed ‘educational’ rather than try to teach their child on their own. But given the many factors that can affect a child’s learning, software programs should not be viewed as a replacement for a parent or teacher.

Instead, programs that provide scaffolding should be viewed as an opportunity for less confident parents to learn how to give appropriate feedback and support to their child. There have been studies confirming that low-SES parents may not provide the same rich interactions with their child as high-SES parents (Hammer, 2001). However, research in reading interactions has shown that parents can be easily trained to provide quality interactions (Arnold et al., 1994). With today’s technology parents can, without extra training, learn to use prompts provided by the program to serve as cues to provide that extra support and ensure that their child is paying attention to the relevant information.

Misconception 3: ‘It is important for my child to learn to use technology, especially computers, or they will fall behind.’

In a 2011 Cooney Center survey of 800 parents of children aged 3–10, nearly three-quarters of parents felt that technology and computers were important to their child’s success in school (Takeuchi, 2011). The same parents also felt that, of the different platforms, computers had the most educational potential and mobile devices or phones the least. While it is true that it is important for children to be proficient in using technology, parents may be placing too much emphasis on the platform itself rather than the content. The technology is only a delivery system for information. Software applications are becoming more and more platform-agnostic, downloadable onto virtually any device. Young children have proven to have natural instincts when it comes to using technology. Thus, the focus should be on exposing children to the right material, not the right technology.

These three misconceptions overlap in that they have led some parents to believe that they may not need to play an active role while their child interacts with technology. While independently playing with a quality app may be beneficial for young children at times, it should not be accepted as the norm or the optimal type of interaction. Specifically, low-income families and families with struggling students should view educational apps as an opportunity for family interactions. Granted, parents are busy, especially those who are working long hours to make ends meet. But the average session children spend with an app is 20 minutes or less (Chiong and Shuler, 2010), less time than watching a TV show. Given the anywhere/anytime nature of mobile technology, parents should seize the opportunity to make the 10 minutes waiting for the school bus meaningful. Mobile technology can not only change the way we educate our young children, but also change when and how families interact.

Email ThisBlogThis!Share to TwitterShare to FacebookShare to Pinterest
Labels: Research and Theory

Cynthia Chiong
I am an educational media researcher. To learn more about me and my research check out the tabs on top.

Search for an app:

5 stars: Definitely check this out!

4 stars: Solid app, worth checking out.

2 stars: Does not accomplish it's goal, not worth it.

Other educational blogs I check out: